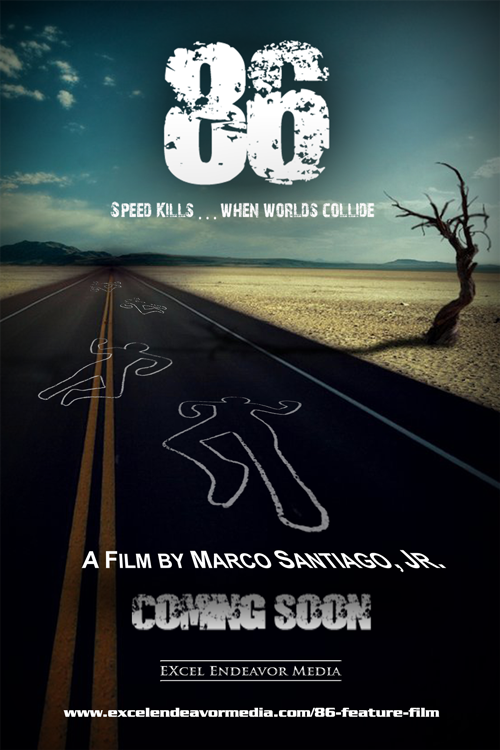 The 86 feature film project is a stylized multi-plot action-thriller about four groups of people who embark on separate life-and-death missions across Southern Arizona until their worlds collide in a high speed collision on Arizona State Highway 86. The story is primarily told through the eyes of Miguel, who unbeknownst to his traveling friends, is on a mission to transport illegal contraband across the U.S. / Mexico border, which turns out to be a life altering package.

Set along the Arizona / Mexico border, “86 is a sprawling road movie. Its underlying theme explores the profound consequences of aggressively and blindly pursuing one’s immediate personal goals at the expense of one’s “own” moral border. The story deals with the consequences of living a hurried life. This theme serves as a commentary on the culture of speed in today’s society as our players struggle with their challenged relationships.

“86”explores this theme with the idea of time “Time Sickness” – an obsessive belief that time is getting away, that there isn’t enough of it and that one must pedal faster and faster to keep up. Time sickness, as explored in “86”, is symptomatic of an even deeper existential malaise, where in the final stages of burnout, our characters speed up to avoid confronting their unhappiness. In “86”, speed is considered an escape, not from life, but from death. It reflects our characters subconscious desire for transcendence and provides a way for them to forget about the fact that they are all going to die – a way for them to distract themselves from the awareness of their own mortality. The story attempts to explore themes that deal with the consequences of living a hurried life personified by a culture of speed in today’s society and how decisions, actions and behaviors that are based on expediency have the potential to adversely affect communication, interpersonal relationships, moral perspective and even lives.

I believe that this is a worthwhile theme to explore, especially for the times that we live in. Corporations and business processes, governments and their policy making mechanisms, and so much of what we do as individuals in our narrowly scoped personal worlds, seem to be driven and measured by how fast we get things done and how much of these “things” we do. The irony is that our rush to get from point A to point B usually results in flawed or underachieved results, which require us to do things over again, and consequently it takes a much longer time to achieve the results that we eagerly set out to achieve in the first place. In many cases we are disappointed with the results. Recent geopolitical events, affected by narrowly scoped foreign policies that seem to be driven by short term political gains and expediency is an example of how profoundly we’re affected – globally. The rush to war in Iraq is an especially profound example.

Although “86” explores profound and universally relevant themes, it is primarily meant to entertain the movie-going audience as a dramatic-action thriller. “86” is inspired by a legacy of great cinema that include work from the Coen Brothers, Steven Sodebergh, Paul Thomas Anderson, Alejando Gonzalez Inaritu and other great voices of cinema.

The film project is in the advanced stages of development. Part of its development took place at the NALIP Writers Lab in 2006, where it was selected for development under the mentorship of Diana Lesmez, former President of Production at Arenas Entertainment. Marco was also a producing fellow at the NALIP Producers Academy in that same year, and again as a directing fellow in 2007, where he shot several scenes under the mentorship of award winning directors, Luis Mendoki (Message in a Bottle, When a Man Loves a Woman, Trapped, Angel Eyes) and Director Alredo De Villa (“Washington Heights”, “Adrift in Manhattan”), as well as writers Miguel Tejada (“Revenge of the Nerds”, “The Lion King”) and Ligiah Villalobos (HBOs “Walkout”, Disney’s “Go Diego Go”, Fox Searchlight’s “Las Misma Luna”, TV series “Ed”).

The “86” screenplay was a finalist for consideration to the Sundance Writers Lab for 2007, having been selected in the top 10% out of 2300 submissions that year. The project has since been invited back for re-consideration by the Sundance Institute.

The project was featured in a five page feature article in the April/May 2008 issue of Indie Slate Magazine (issue #53).