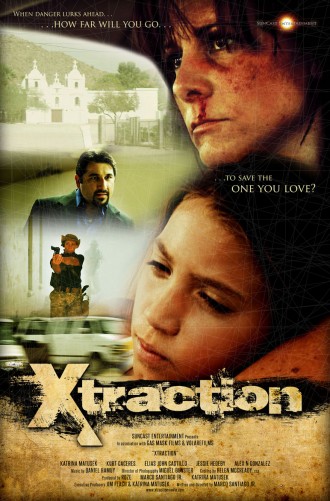 Set in Afghanistan, the Mexican Border and the world of black market Organ trafficking, the Xtraction short film is a dramatic and elevated-action-thriller that follows Ronnie, a hardened ex-military contractor who emotionally reconnects with her daughter as she attempts to rescue her from the hands of Rene, a corrupt U.S. Consulate in Mexico. . . . . How far would you go to save the one you love?

Ronnie is a hardened ex-military contractor. Her experience and participation in stressed filled interrogations of Mujahedeen fighters, hand-to-hand combat and other related military operations (some under morally ambiguous directives), has left her suffering from symptoms of post-traumatic stress disorder (PSD).

Ronnie’s only means of coping with PSD is to fill her days with the many details of work as a professional security and law enforcement consultant in Mexico. Her days and weeks are filled with meetings, projects, phone calls and risky trips to and from Mexico. Ronnie’s busy schedule becomes a means of escape from her emotional life. Ultimately, Ronnie does not even have time to take her daughter to soccer practice.

All this comes to a head after Ronnie’s daughter is abducted in a Mexico border town after an argument between her and her daughter. The inciting and traumatic incident is one that separates the two. It’s the event that awakens Ronnie to a loss greater then the physical loss of her daughter.

Ronnie and her husband (Dave) subsequently travel back to Mexico in search of McKenna and to meet with the U.S. Consulate (Rene) whom Ronnie works for as a law enforcement consultant, only to be abducted herself. During her interrogation, Rene is revealed to be her abductor and proceeds to torture her in order to obtain information about U.S. agents embedded in local customs.

Ronnie’s warrior training allows her to kill Rene and escape with her daughter. And in the process she emotionally reconnects with her family.

Enjoy watching videos of the Making of Xtraction